BY DUNAND AND RATEAU 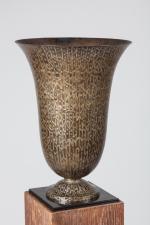 Bought by a Parisian collector, this lamp, the star piece of eighteen lots from the Rateau estate, achieved a world record. Signed twice, it illustrates the collaboration between two masters of Art Deco, Rateau and Dunand. Trained at the Boulle school, Rateau embarked on a career as a designer alongside Georges Hoentschel, before setting up his own business in 1919. He soon emerged as one of the most singular creators in Art Deco. His masterpiece, Jeanne Lanvin's apartment in Rue Barbet-de-Jouy, evinces a real taste for Antiquity while featuring a highly original bestiary. Responding to commissions from a rich clientele, he called on celebrated collaborators like Jean Dunand, renowned for his vases in gilt and silver-gilt metal ornamented with champlevé or cloisonné enamels. During the Exhibition of 1925, the artist lent him a few pieces to brighten up the stand of the milliner Madame Agnès in the ‘Pavillon de l'Elégance’. This vase, mounted on a small pedestal, was designed as a lamp from the outset. It is decorated with spots and sinusoid lines in a black lacquer reserve, worked like Eastern calligraphy. Positioned advantageously in the dining room at 17 Quai Conti, it still bears witness to the friendship and mutual admiration of Dunand and Rateau, who revolutionised the decorative arts in the period between the World Wars.