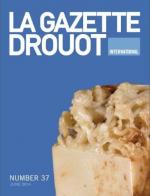 This year, the 26th Garden Party at the Château de Cheverny promises to turn more than just a few heads (Rouillac auction house). A sale lasting no fewer than three days has been announced, starting with African and Asian art on 13 June. "The Great  Wave at Kanagawa" by Hokusai, from his ultra-famous series "36 Views of Mount Fuji" (see photo), will no doubt carry all  before it… while we await the apotheosis of the Japanese master at the Grand Palais exhibition in Paris in September this year.

The afternoon of 15 June sees a tribute to the doyen of Paris antique dealers, Jean Renoncourt, whose store is on the corner of Rue des Saints-Pères and the Quais Voltaire and Malaquais. This venue, the haunt of both King Hussein of Jordan and the dancer Rudolf Nureyev, is shortly shutting down and its treasures wending their way to the action room. Renoncourt made his name in 19th century art, illustrated by an Empire period rectangular wall console with uprights in the form of Antique women in bronze (€7,000/10,000), a pair of early 19th century candlesticks in Swedish porphyry by Pierre Chiboust (€8,000/12,000) and a French Restoration crown-form chandelier in gilt bronze, patinated sheet metal and crystal with a zephyr decoration (€4,000/5,000). The final act in the trilogy on 16 June stands out for its 24 lots from the Rateau estate, or more precisely that of the artist's eldest son, François Rateau. The furniture and works of art presented long held pride of place in his Quai Conti private mansion, like a trumpet vase in copper mounted as a lamp by Jean Dunand (€20,000/30,000), and a "7098" lyre desk in limed oak, used by Rateau's grand-daughters to do their homework (€70,000/90,000). The cabinetmaker liked to reproduce his favourite designs, like a pair of low armless chairs with cabriolet backs "en hotte" and small tapered legs carved with palm tree trunks, inspired by the ones he made for Jeanne Lanvin, now in the Musée des Arts Décoratifs (€50,000/80,000).
26ème VENTE GARDEN PARTY
Vendredi 13 juin 2014 à 15h
Inscrivez-vous à notre newsletter :
Suivez-nous :
Contact
ToursVendômeParis
Acheter et vendre
Conditions de VenteExpertises en ligneNos belles enchères
Mentions légales
©2022 Rouillac SAS