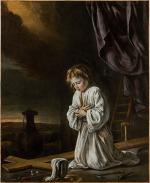 L'enfant Jésus en adoration de la croix (1642-48) was recently discovered in a French collection and attributed to the Le Nain brothers Courtesy of Rouillac
The 17th-century work, a depiction of Christ as a child, could set a new artist record in June

A painting believed to be by the Le Nain brothers has been discovered in the house of a woman in her seventies in France. Titled L'enfant Jésus blond méditant devant une croix, it depicts Christ as a child praying next to a cross on the ground, his hands clasping his heart, a halo above his head. Next to him is the goblet and towel used by Pontius Pilate to wash his hands after agreeing to crucify Christ.

Having been given the small-scale oil painting by her grandmother in the 1950s, the owner in Vendée, western France, contacted the auctioneer Aymeric Rouillac as she was selling some of her possessions. “I was very surprised when I saw it because I had never seen a representation of Christ as a child praying on a cross,” Rouillac tells The Art Newspaper.

Although a local restorer believed the painting was English, Rouillac thought otherwise and asked permission to study it with with his father Philippe Rouillac and the paintings expert Stéphane Pinta at Eric Turquin's cabinet in Paris.

“My first intuition when I received an image of the painting was that it could only be by the Le Nain brothers,” says Pinta, who recognised the model from another work executed by brothers Antoine, Louis and Mathieu, and was struck by its “religious intensity”. After examining it by X-ray and infrared light, Pinta deemed it a “major work” from between 1642 and 1648 by the trio, who worked in collaboration, their individual hands being indistinguishable.

The Rouillacs, Pinta and Turquin asked a curator at the Musée du Louvre if they could compare it with paintings by the brothers in its collection. “Our painting is very close to one of a family of peasants in the Louvre,” says Rouillac, adding that the discovery augments the brothers' biography by shedding light on their religious persuasion. “Not much was known about the meaning of their paintings but this inscribes them in the Reform movement in the Catholic church [aimed at preventing the development of the Protestant Reformation],” he explains.

The painting is being auctioned on 10 June at the Château d'Artigny in the Loire Valley and is estimated at €3m to €5m – three times more than a painting of Saint Jerome being auctioned next month by Christie's New York (est $1m-1.5m). “Ours is a unique and extremely striking, magical and very rare painting that is on its original canvas,” Pinta says, adding that it is being restored for a second time after having been restored 10 years ago.

Last year, the Louvre-Lens organised an exhibition, Le Mystère Le Nain, that assembled 55 of the 75 paintings attributed to the trio, describing them as being “among the most important French artists of the 17th century, with Nicolas Poussin and Georges de La Tour”. However, the works are scarce on the market. According to Le Figaro, a painting titled Saint Pierre by the Le Nain brothers, priced at €11.5m, was acquired by the Louvre in 2010 with support from its sponsor, the French insurance company AXA.
30ème VENTE GARDEN PARTY - I
Dimanche 10 juin 2018 à 14h30
Lot 60
Inscrivez-vous à notre newsletter :
Suivez-nous :
Contact
ToursVendômeParis
Acheter et vendre
Conditions de VenteExpertises en ligneNos belles enchères
Mentions légales
©2023 Rouillac SAS