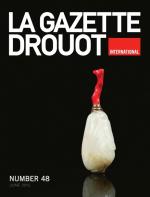 Different venue, same level of excellence… Father and son Maîtres Rouillac will this year be hosting their unmissablegarden party at the Château d'Artigny, 15 km from Tours. Several bids of over a million are expected at this newedition, notably for a 17th-century lacquer cabinet and a mechanical table made by Louis XV's cabinetmaker, Jean-François Oeben (see Gazette International 47). There will also be a lively battle for a remarkable sword "of the Frenchcourt", from the First Empire/French Restoration period (1809-1819) with a gold and lapis lazuli mount, known as a"Hercules" sword because of the superb chased gold mythological decoration on the hilt and guard(€200,000/300,000). This rare work by the Emperor's goldsmith, Martin-Guillaume Biennais (1764-1843), is thought tohave been given in around 1814 by the King of Spain to the Duke of San Carlos, José Miguel de Carvajal, a Spanishdiplomat who took part in the secret negotiations for the Treaty of Valençay, which restored Ferdinand VII to thethrone. Between 1823 and 1828, Don Carlos gave the ceremonial sword to his future son-in-law, Comte Charles de l'Espine,and it has remained in the family until now.