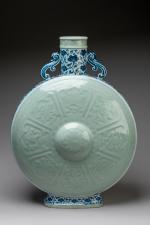 As every year with the approach of summer, the Château d'Artigny, in the Val de Loire, makes ready to host the now famous garden party orchestrated by the Rouillac auction house. An outstanding lot at this 30th edition is a group of porcelains brought back from China between 1842 and 1847 by a French navy officer ("one of history's great men", as we are told) sent on a mission with the minister Théodore de Lagrené. They include twelve imperial tea bowls, five from the
Daoguang period (€8,000 to €40,000), and a moon flask vase with the Qianlong Emperor's mark (see photo). Estimated at €600,000/800,000, this vase is "exceptional" for its size (50 cm) and the technical sophistication of its execution, featuring the extremely rare combination of a blue-white porcelain background with a belly embellished with celadon medallions.

It will be escorted in this two-day sale by a series of four paintings by François Boucher, commissioned by the Marquise de Pompadour for the Château de Crécy (€400,000/600,000), a "Daim passant" by Rembrandt Bugatti (€100,000) and Balzac's personal furniture from the Château de Saché (€35,000). The ultimate star (€1 million), making its debut at auction, is a
painting by the Le Nain brothers of an extremely rare single figure (the child Jesus, to be specific). This has to remain in France, as its export has been prohibited for 30 months by the Ministry of Culture. Foreign collectors can console themselves with two tapestries on "the story of Don Quixote" (€300,000/400,000), commissioned from the Mortlake factory by the English Queen Consort Catherine of Braganza for the Marquis of Fronteira (which could well be repatriated to the UK after lording it in the grand salon at the Château de Coulonge), and with a bronze by Camille Claudel (€50,000/80,000): a 4/8 model of "Les Causeuses" cast in 1896, and now put up for sale by the sculptor's great-niece, Reine-Marie Paris. Last year, on the same impeccably mown lawn, a "Valse" by the artist garnered a world record of €1.18 million.