RAYMOND REYNAUD, THE ATYPICAL ARTIST FROM THE ALPILLES 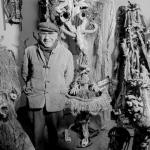 This auction has the flavor of first times.

100 paintings and sculptures by Raymond Reynaud (1920-2007), a leading figure of outsider art, will indeed be auctioned off for the first time ever. Carefully selected by the artist's family, whose trust honors us, they will be priced at 500 euros or 1,000 euros so as to allow each amateur to keep the master of Sénas’s flame alive.

A house painter and a saxophonist

As a young man, Provence-born Raymond Reynaud (Salon de Provence, 1920 - Cavaillon, 2007) a house painter and saxophonist in a successful orchestra, discovered artistic painting through Picasso’s art, deeming it unsatisfying as it "closed the door to the imagination". After giving up his trade in the 1960’s, he received the shock of "Art Brut" thanks to Gaston Chaissac, who showed him that another artistic path existed between that of "village painter" and that of the School of Paris, whose mentors’ teachings he first followed, going so far as to lead the "Arts plastiques des Alpilles" group in the 1950’s.

His painting became atypical, infused with poetry, rambling geometry, electric graphics and dreamlike imagination. It explored the world’s mysteries and great popular themes such as Suzanne and the old men, Jean de Florette, the Circus, Don Quijote, the Seven Deadly Sins or the Four Seasons... After moving to Sénas with his wife Arlette, he opened in 1977 an art studio for adults called the "Quinconce vert". Jean Dubuffet encouraged his endeavors, writing: “In such a period of crisis, where art seems to be the victim of the paralysis of a centralized, elitist and hermetic system, the popular artist scene established by Raymond Reynaud appears as a lively alternative and a prototype for a new and bountiful form of creation”. The school of Sénas was renamed Mouvement d'Art Singulier Raymond Reynaud in 1990.

When the "Master of Sénas" died in 2007, most of his works was still kept in his house-studio apart from a few donations to museum collections.
While Laurent Danchin enjoyed his use of gouache on paper mounted on canvas, first on miniatures and later on large panels, Martine Lusardy considered him as some kind of Don Quijote of modern times, “an emblematic figure of outsider art akin to Chaissac, the Facteur Cheval or Chomo”.

An association of friends

As the time has come to auction off 100 paintings and sculptures of this Provence master, a genuine tutelary figure of outsider art, I am seized with emotion thinking in particular of those who have been and still are the conveyors of these unclassifiable artists: our friend Laurent Danchin obviously, who opened my eyes to another type of creation, but also those who devote themselves to these artists, in particular Reynaud’s family and the “Association des Amis du Singulier Raymond Reynaud” who honor us with their trust by relying on my hammer for this auction unlike any other.
RAYMOND REYNAUD: 100 CAREFULLY SELECTED ARTWORKS
Monday, November 28th 2022, 14:30
Subscribe to our newsletter:
Follow us:
©2023 Rouillac SAS