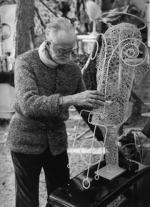 A very gifted young man
Roger Chomeaux was born in 1907, in the northern French town of Berlaimont. Gifted with an instinctive sense for shape and space, he quickly enters the École des Beaux Arts in Valenciennes, then in Paris, where he practises painting and sculpture. Chomeaux is a student who is appreciated by his teachers, and he wins several prizes before finding employment with a specialist carpet-making business, while his wife sells craft wools on the Quai des Grands Augustins.

But the Second World War removes this promising young artist, already a father of four children, to a Polish POW camp, from which he returns a man in revolt. Over the course of the next decade, he takes refuge in the Forest of Fontainebleau, where his wife has bought a few
hectares of land. He takes up at that time a parallel language and from then on signs his name as “Chomo”.

In 1960, his first exhibition at the Galerie Jean Camion, Rue des Beaux-Arts, is a success. The last of the Surrealists swoon over his burnt wood pieces, but Chomo flees from fame and money and is just as ready to show an enthusiastic Jean Cocteau the door as the gallery’s patron: Alix de Rothschild. He decides at that point to leave Paris permanently. Thus begins the new life of an unclassifiable man.

A visionary artist
Chomo settles alone in Achère-la-Forêt, surrounded by passing friends and opening up to the public on Saturdays and Sundays. An ecologist ahead of his time, a bee-keeper – he will keep up to twenty hives – he works with wood, fire and spirits. The path that leads to his artistic domain, where he used to work in the open air, is scattered with inscriptions. We read there for example: “Qèl anprint ora tu lésé sur la tèr pour qe ton Die soi qontan?” (“Quelle empreinte auras-tu laissée sur la terre pour que ton Dieu soit content?” – “What mark will you have left on earth to make your God happy?”).

Because Chomo develops a phonetic writing whose poetry pervades his work. They call him the hermit of the forest, and he imagines the world of the future: between cosmic reveries, biological observations and environmental disaster. He thus baptises his corner of the forest: “Village d’Art Préludien”, the village of “preludian” art: because his art is the prelude, the key to understanding and accessing the new world that’s coming.
A SCULPTOR OUTSIDE THE NORMS
Putting aside bronze, terracotta and marble, Chomo deliberately chooses “materials that breathe”. Sheet metal, wood, plastic, glass and concrete are sources of permanent discovery. He ceaselessly reinvents the figures of Man, God and World. The sculptor pursues his series of burnt wood pieces, working between reclaimed and natural materials. He also shapes chicken wire, which he paints or inlays with melted plastic and various media. Reworking children’s toys, Chomo “stigmatises” them to give them more than a new life: a soul.

Cellular concrete, or siporex, opens up new perspectives for him: “I sculpt it like writing a poem”, he explains to his visitors. His work with colour finishes on each of these unexpected media betrays his very considerable classical knowledge, even though he disowns it and claims to have spent 40 years unlearning the teaching of the Academies.

A protean genius
Chomo is a total artist. His drawings and paintings are a faithful and audacious response to his sculptures. But he also throws himself into architecture and the art of stained glass: he makes three buildings out of wood, chicken wire and bottles. The first is called the “Sanctuary of Burnt Wood Works” (“Sanctuaire des bois brûlés”); the second, “The Church of the Poor” (“L’Église des Pauvres”), is adorned with a spectacular rose window, and the last one, “Refuge”, is covered with car bonnets. It was Clara Malraux who, sent to report on his works on-site, convinced the minister for cultural affairs (her ex-husband, André Malraux) of Chomo’s creative genius, whose freedom from then on no longer had to suffer under bureaucratic regulations.

But Chomo considers his great work to be elsewhere. After being a pioneer of concrete music in the Forest of Fontainebleau, between synthesizer music and poetry, the sculptor becomes a film-maker. His twenty hours of footage in the 1980s are at the leading edge of experimental cinema. The title of the film resonates like a program: “The spiritual disembarkment” (“Le débarquement spirituel”).

Chomo dies in 1999 amidst his works, watched over by his second wife, but completely indifferent to the public authorities, the art market and the inner circles of the cultural scene. Ten years after his death, the Halle Saint Pierre, Musée de la Ville de Paris, has just given him his first major retrospective, and for the first time his work is facing the fire of the auctions at Cheverny.