by Pierre-Auguste Renoir and Richard Guino 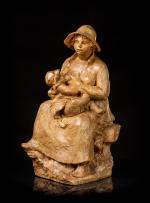 When his wife Aline died in 1915, Renoir designed a funeral monument for her grave in the cemetery of Nice. Together with sculptor Richard Guino, they reinterpreted his 1885 masterpiece depicting her nursing their eldest son Pierre (Musée d'Orsay, RF 1998 35). During the summer of 1916, both men worked on two sculptures, this Maternity and a Bust of her, first in Essoyes and then in Paris. It’s an enlarged version of this Bust that was finally cast in bronze.

Between 1913 and 1918, art dealer Ambroise Vollard "found a pair of hands" for Renoir in the person of Richard Guino, a young Catalan sculptor who had previously worked with Maillol on the life-sized nudes of his Cycle des Saisons. No contract between Guino and Renoir was ever signed: the artists only had an agreement with Vollard that saw the art dealer paying the Catalan artist for each sculpture he made and buying the painter’s works and their copyrights. Renoir, who was partly paralyzed, would sign a wax or clay tablet with the handle of his paintbrush to be inserted into the sculpture before it was molded. Guino would mold plasters that were then brought to Paris where he would supervise their bronze casting, mostly by Florentin Godard, for Vollard.

Renoir and Guino first started working on a cycle of sculptures inspired by mythology, leading to the creation of the massive Venus Victrix, the Jugement de Pâris high relief and the Bust of Pâris. A clock called “Hymn to Life”, representing a toddler being carried to heaven, symbolizes the passage of time. Portraits of Cézanne, Monet, Rodin, Delacroix, Ingres and Corot, who were friends or artists that Renoir admired, adorn medallions, while allegories of Water and Fire, incarnated by a Laundress and a Blacksmith, glorify the beauty of everyday gestures – see The Great Laundress (aka Water), which was the last work Renoir and Guino collaborated on.

Made between July and September 1916, our sculpture was not commissioned by Vollard but an initiative of the painter who, with the help of the young sculptor, wanted to pay tribute to his deceased wife. Upon Renoir’s death, Galerie Flechtheim in Berlin and Galerie Barbazanges-Hodebert in Paris edited this Maternity (Height 54 cm). The Valsuani foundry subsequently cast bronzes for both art dealers, two of which are held in the collections of the Tate Gallery in London (inv. nr. N04435, n°10/20) and in the Beaux-Arts Museum of Lyon (inv. nr. 1974-62). The Bignou Gallery, editor of Renoir bronzes starting in the mid-1930s, also worked with Valsuani. Other models were made by Rudier (Height 53.7 cm) and at least two were cast in terracotta or clay by further editors (Height 19.5" and 20.5"). The last original edition of the Maternity and its Study were produced by the estate of Richard Guino in the 1980s (Height 21 1/4" cm and 12 1/4"cm). This plaster, which had remained in Renoir's estate to this day, was discovered on the occasion of our auction. Only four plasters of this sculpture had been previously referenced: one held in the collections of the Perpignan Museum (former Bignou collection, purchased at the 33rd Garden Party Auction, Rouillac Auctioneers, Château d'Artigny, June 6, 2021, Lot nr. 72 - Height 21 1/4" cm), two in the collections of Renoir Museum in Cagnes (Height 22") while the last one was presented at auction in the United States (Heritage sale, "The Unknown Renoir: The Man, The Husband, The Father, The Artist Signature," New York, September 19, 2013, Lot nr. 89113, Height 22").

Our heartfelt thanks go to the Guino family, Ms. Anne Demeurisse as well as Mses. Isabelle Gaétan and Nadège Horner, from the Documentation Studies Department at Musée d'Orsay, for their explanations.