made for the Duke of Orléans 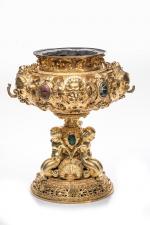 A sumptuous mid-19th century gilded bronze cup with sculpted faces and figures of sea gods, decorated with semi-precious gemstone cabochons. Presumably part of a dessert service having belonged to the French royal family.

Our extravagant cup blatantly shows the 19th century taste for medleys of past fashions - or “revivals” - that inspired decorators, art dealers and collectors at the time. While its semi-precious stones inlay is characteristic of the 17th century craze for “mounted” objects, decorative elements used under Louis XIV’s reign, such as figures of double-tailed Tritons which were invented by Gian Lorenzo Bernini in 1643 for the Piazza Barberini Fountain in Rome, are also generously represented here. It is interesting to note that similar Tritons can be found on the silver centerpiece of the surtout de table designed by Jean-Jacques Feuchère and delivered by François-Désiré Froment-Meurice between 1849 and 1854 for the Duke de Luynes (Musée du Louvre, OA 12518 to OA 12520). Our bronze cup probably sported a lid or a large crystal cup held in place by two handles - the lower part of which is still visible - as on serveware that was part of the 1844 gilded bronze dessert service made by Denière and Klagmann for the Duchess of Orléans (Musée des Arts Décoratifs, Paris, inv. 18273 A-C). While the letter “D” that is stamped on various pieces could be Denière’s initial, neither the archives of the 1844 Exhibition of Industrial Products nor those dedicated to famous artists and craftsmen François Fannière, Henry de Triqueti, Jean-François Denière or Aimé Chenavard allow us to identify with certainty the author of this masterpiece.

The sheer luxury displayed on this cup would tend to prove that it was part of one of the services ordered by the Duke of Orleans - and after his passing, by the Duchess of Orleans - which have now disappeared or been disseminated. Ferdinand-Philippe d'Orléans (1810-1842), eldest son of King Louis-Philippe I, ruler of France at the time, continued the House of Orléans’ tradition of arts sponsorship. In January 1834, announcement was made that Aimé Chenavard and Antoine-Louis Barye had been charged with crafting a surtout de table, whose subject and execution were left entirely to the imagination of the two artists. Its elements were to be enhanced by inlays of a great quantity of vividly colored fine stones and its centerpiece made of fifteen sculptures depicting hunt scenes made by Barye. Chenavard’s successor Guillaume Denière added a dessert service to this fabulous set, collaborating on this work with various artists and manufacturers, such as Moine, Mention, Wagner, Klagmann, Fratin, Feuchère, Pradier and Barye.

Unfortunately, the surtout was not finished when the Duke of Orléans died in 1842, nor in 1848 when Louis-Philippe was overthrown. It was finally discovered on the occasion of the auction sale of the Duchess of Orléans' collection held from January 18 to 21, 1853. The minutes of the sale conducted by M. Bonnefons de Lavialle, Auctioneer in Paris, list no less than 192 lots of objets d'art sold during the course of the first two auction days, including the abovementioned large surtout and dessert service. Our cup could have been one of the twenty-six gilt bronze cups and dishes on this list. While the sculptures made by Barye were sold between 4,100 and 7,100 francs (for the bear hunt acquired by Count Demidoff), the other cups were sold between 2,850 and 5,800 francs to various buyers, among which bronze caster Denière, who bought his own works back. The objects are summarily described: "bird cup" (lot 104), "fruit cups" (lot 106), or centerpiece "with modeled ornaments, gilded moldings and gems" (lot 120). The fifteen pieces making the dessert service, including a pair of candelabras that recently entered the collections of the Metropolitan Museum of Art (2020.96.1, 2), were simply described as "gilt and mounted bronze" and sold under lot numbers 166 to 199. Our large cup is a rare testament to the excellence of Parisian craftsmanship, at a time when triumphant industry was preparing to mechanize and conquer decorative arts. This order is in all likelihood connected to the Orleans family, whose patronage illuminated France and the reign of King Louis Philippe.

Our most heartfelt thanks go to Fabienne Fortier, archivist, who documented the dessert service of the Duke of Orleans and to Bertrand de Royère, art historian and specialist of Maison Odiot, for their much appreciated suggestions.