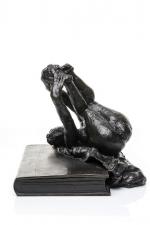 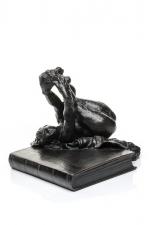 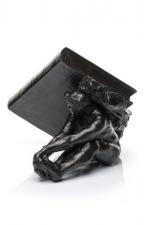 The Ecclesiastes’ origins date back to the early 1890s when Rodin, who was working on The Gates of Hell, modeled the Seated Figure now held in the collections of the Philadelphia Museum of Art (nr. F1929-7-105). The sculptor embarked on a fascinating work consisting of dismantling and assembling his sculptures, playing with their different sizes. Other studies of the same model, a favorite of his studio, have been preserved in partial forms, such as The Morhardt Torso (ca. 1895), Le Nu de grosse femme (before 1900) or La Coquille et la Perle (c. 1899-1900).

In 1898, Rodin had the idea of associating this seated figure with Ecclesiastes, one of the books from the Old Testament that was in his personal library. By making this choice, unique in his entire repertoire, Rodin freed his Nude from the languid esthetics of models lying on heady cushions, such as those imagined by Boucher or Fragonard (see Fragonard’s La Gimblette).

A biblical text, long thought to have been written by King Solomon, Ecclesiastes is imbued with a fatalistic vision of the meaning of life, leaving to posterity idioms such as "Nothing new under the sun" or "Vanity of vanities! All is futile!" Here, the Seated Figure is turned, in a very subversive way, so as to lie on her back on this Hebrew book, consequently showing her private parts in a demonstration of vanity. Robert de Montesquiou described her in 1903 as "dominating and spreading her nudity on a scientific book".

As with Iris, Messenger of the Gods (ca. 1894), the sculptor uses the relaxed body of his model to present it in an impossible balance that gives it an explosive tension. Art critic Gustave Geoffroy recognized the genius quality of this approach: "When comparing the existing shapes with the reproduced ones, Rodin was stunned by the countless positions that were possible. For him, postures cannot be reduced to a few types, but they also appear infinite, generating each other by the decomposition and re-composition of movements, multiplying in evanescent aspects every time the body moves ".

From Diana the Huntress by Houdon to Queen’s Vagina by Anish Kapoor, the representation of the female sex never ceases to trigger outrage. Diane was banned from the Salon in 1775 and again in 1777, and her bronze only entered the Louvre in 1829 on the express condition that her vulva be filled and hammered out. This symbolic act, akin to excision, can still be seen in the largest museum in the world (n° NBC 204). Just as The Origin of the World by Courbet remained hidden for a long time behind a surrealist landscape by André Masson at the home of psychoanalyst Jacques Lacan, Ecclesiastes was not cast in bronze during the artist's lifetime. However, Rodin had exhibited its plaster in Brussels, The Hague or Düsseldorf and even at the Pavillon de l'Alma in 1900 (n°24) and a marble sculpture of it had been made.

The Rodin Museum did not undertake the casting of its plaster before the end of the 20th century. Our original bronze, numbered 3/8, has remained in the same family ever since. German artist Anselm Kieffer may be the one who best captured the incredible power of this small sculpture, making it one of the focal points of his 2017 confrontation with Rodin, in Paris and then at the Barnes Foundation. Far from voyeuristic eroticism, Rodin's nudes are an ode to nature, women's bodies and simply... to life!

Our heartfelt thanks go to Mr. François Blanchetière, curator at Musée d'Orsay, for his brilliant comparison of this sculpture with Houdon's Diane.
34th GARDEN PARTY AUCTION -DAY I
Sunday, June 19th 2022, 14:00
Lot 124
Subscribe to our newsletter:
Follow us:
©2022 Rouillac SAS