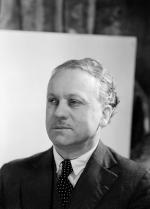 A ca. 1930-1935 painting by Raoul Dufy depicting racehorse owners at a racetrack. Signed oil on canvas.

Starting in 1923-1925, Dufy became more preoccupied with light and color than with composition. After Poiret introduced him to horse racing, racetracks became for Dufy the ideal playground to put his theory of couleur-lumière into practice. The rich owners’ crowd who came to admire their horses at weigh-in wearing multicolored umbrellas, suits, dresses and hats proved ideal to the artist’s eye. Whether in Ascot, England, or in Longchamp and Deauville, France, Dufy noticed the same phenomenon: when the sunlight is parallel to the ground, it only hits one side of objects standing on it, leaving the other side in darkness. Considering that "each object possesses its own center of light", he chose to bring light from both sides, adding that he "models each object towards its edges, where it reaches a pure or reflected darkness before touching the center of the neighboring object”. This is why pure colors never come in contact with each other in any of the artist's works.

As a demonstration of his theory of couleur-lumière, Dufy made a distinction between “local” and “ambient” tones, or between the specific color of an object and the tone of the whole painting. In his notebooks, he wrote: "The ambient color of a painting is determined by the color of the object that is the main subject of said painting. By spreading its local tone on the surface of the canvas, I defuse it, meaning that said color no longer pinpoint to this or that object. As for the other elements of the painting, I free myself from the constraints of imitation, which gives me complete discretion to imagine color.”
For this true gem of a painting, Dufy specifically picked the exciting moment of the pre-race, when crowds mingle and shadows and colors overlap.
34th GARDEN PARTY AUCTION -DAY I
Sunday, June 19th 2022, 14:00
Lot 110
Subscribe to our newsletter:
Follow us:
©2022 Rouillac SAS