Jean Royère and Charles Lapicque: From Line to Color 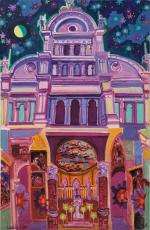 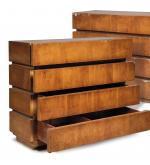 20th-century masters, starting with Jean Royère, will share the bill with a large group of some 60 works by Charles Lapicque, mainly from his family.

In 1934, Dr. Alfred Bensaude (1908-1982) commissioned Jean Royère to make some furniture for him and his bride-to-be. Dr. Bensaude, who belonged to an important dynasty of doctors and co-founded the Société Française de Proctologie, had avant-garde tastes. Royère had only been in Paris for three years and was not yet as successful as he became after the war. At the age of 29, the self-taught designer left a comfortable import-export job in Le Havre to pursue his dream in Paris, where in 1933 he received his first commission, for the Carlton Bar on the Champs-Élysées. His reputation soon spread among those in the know. Bensaude chose him to furnish his apartment in Avenue Pierre Ier de Serbie. As usual, Royère made a coherent, complete group, known from his archives, which are in the library of the Musée des Arts Décoratifs in Paris. Once connected by a middle drawer and surmounted by three mirrors, this pair of commodes was in the family until now. It was accompanied in the couple’s bedroom by a matching wardrobe (162.5 x 210 x 55 cm/64 x 82.7 x 21.7 in), also for sale (€10,000/20,000).


While their geometric shapes and the use of sycamore are characteristically Art Deco, these pieces already feature the minimalism and elegant, simple lines that made Royère famous. Charles Lapicque relied on the science of color to make the 60-odd paintings in the Alain and Violette Merle Collection; Violette was the painter’s granddaughter. They offer a fine overview of Lapicque’s career. An unclassifiable artist, he was inspired as much by Cubism as by medieval stained glass windows. Color had already made a powerful impact in his 1938 work Le 11 novembre (€10,000/15,000). In 1958, Lapicque painted Night Maneuvers, which evokes his 1949 appointment as the painter of the French Navy and his voyages, especially to Brest in 1958 aboard the Pimodan. It is estimated at €30,000/40,000. Force huit (Force Eight), estimated at €15,000/20,000, dates to 1971.