An unknown Bugatti for the 31st Garden party sale 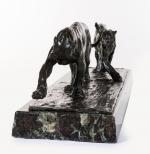 A unknown bronze appearing Two walking panthers, created in 1905 by Rembrandt Bugatti, recently discovered by auctioneers Aymeric and Philippe Rouillac will headline their 31st Garden party sale, on 16 June 2019, at the Château d'Artigny in Touraine.

An early genius sculptor, Bugatti made only five pairs of panthers throughout his life, most often by modelling plastiline directly in front of the wild cages of the Jardin des plantes in Paris.

The bronze discovered corresponds to the Two panthers walking referenced under number 127 of the Monographic repertoire published by Véronique Fromanger in 2016. The print of this group is signed, dated 1905 and numbered 1 by the founder and merchant A. A. Hebrard.

Unknown to the specialist, it is presented on its rare base in Maurine green marble from the Hebrard house. Thanks to its ferruginous inclusions, marble resonates with the exceptional polychrome patina of bronze found only on the artist's most prestigious pieces.

This large sculpture, more than one metre long, was kept in the Parisian collection of the descendants of André Bernheim, a real estate investor at the beginning of the 20th century. First exhibited in 1906, it was then sold for 2,000 francs. Its estimate for 2019 is 800,000 to 1,000,000 euros.

Other works to have joined the catalogue of the oldest French prestigious auction, launched in 1989 under the sponsorship of the Marquise de Brantes: Sun setting by Gustave Courbet in 1865 from a collection in Touraine (est. 50,000 €), two panels by Henri le Sidaner in 1891 for the castle of Aubry in Hainaut and preserved in the descendants of his patron and friend Charles Maurice (est. 10,000 and 30,000 €) or two rare 17th century Mexican feather paintings from a Uruguayan collection (est. 50,000 and 140,000 €).

After having discovered in 2018, in front of Laurent Delahousse's cameras on France 2, a Jardinière aux titans modelled by Auguste Rodin, the Rouillac family found another comparable work in a Brussels collection, bringing to five the number of these complete planters now referenced on earth (est. 50.000 €).

Not confining itself to any period or school, selecting for their exceptional quality and original provenance only the objects of this unique sale, Philippe and Aymeric Rouillac are happy to count also a Pair of lions in Italian 15th century marble from a castle in Sologne (east. 70,000 €), a large tapestry of Goblin manufacture Apollon and muses with softly fresh colours (est. 80,000 €), as well as a Elephant from Qianlong period in cloisonné bronze from the Bulgari collection (est. 25,000 €) or a ring decorated with a six carat diamond (est. 25,000 €).

Other discoveries, still under study and documentation, will soon be announced to the public, before the closing of the catalogue of this sale at the beginning of April.