THERE GOES THE FAMILY SILVER 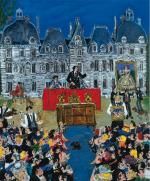 Every year dukes and viscounts rummage through the attics of their châteaux in the Loire Valley looking for treasures to put in the world’s most unusual yard sale—the annual auction at the Château de Cheverny.

In the picture-perfect setting of this magnificent château—the model for Captain Haddock’s ancestral home in the Tintin comic books—the romance and history associated with life in a French castle meet the pressing financial realities of living in a very old home.

Many château owners have come to rely on the Cheverny sale, now in its 14th year, to help raise the money needed to mend a leaking roof, install a much-needed security system or pay property taxes. The pre-sale dinner—at which you can practically count on your fingers the guests without an aristocratic title—also inaugurates a busy program of parties and dinners. But the social side is a blind, a feint, a trompe l’oeil whose real purpose is to obscure the squalid fact that the local gentry are engaged in a venture that involves vulgar commerce!

Behind the frivolity, Cheverny is an important, professionally run auction. The set-up is what happens when you cross a village charity fête with a big-bucks, high-tech international event. Nobody understands that better than the dealers and decorators from Paris, London, New York and elsewhere who show up regularly.  “It’s a treasure trove for decorators,” says Whitney Stewart, an interior designer from Washington, DCand a Cheverny regular. “It’s the best kept secret there is. Each year I buy something either for a client or for myself. My special interest is paintings but the sale has everything—sculptures, furniture, books, you name it. And they always come up with a blockbuster.”

At this year’s sale on June 9-10the blockbuster was a 1782version of Charles Willson Peale’s famous portrait of George Washington. Estimated at $1million, the three-quarter-length picture shows General Washington in uniform leaning against a cannon. The story of its provenance is typical Cheverny, with the sale catalog stating simply that it comes from a “Private collection, Paris.” Anonymous sellers are common at Cheverny—and just as commonly, everyone seems to know who they are. This time, everybody knew that the Washington portrait came from the Comte de Rochambeau—a name perhaps more familiar in American than French history, given that the Count’s ancestor commanded the French forces in the American Revolutionary War.

Some experts say the portrait was a gift to the Comte de Rochambeau from Washington himself. According to others, Rochambeau bought it. What is beyond question is that Rochambeau brought the portrait to France, where it hung in the family château until the present count put it up for sale at Cheverny.

Other notable items in the sale included a collection of delicate watercolors of flowers painted by Princess Caroline, eldest daughter of Britain’s King George III, and a Delacroix pastel of a sleeping tiger. There was also a Louis XVI commode signed by Louis Riesener, the King’s favorite cabinetmaker. This outstanding example of French craftsmanship had never been removed from a château in Orléans before going on sale, and the estimated price was $250,000.

Of course, there was also the usual helping of ancestral portraits. The Duc de Caraman was selling off a fine full-length portrait of an Italian 17th-century female ancestor. A Flemish school likeness of François van der Burch, archbishop of Cambrai, was put up for sale by—you guessed it—the Burch family.

The auction at Cheverny was the brainchild of the Marquise de Brantes, a remarkable American who for nearly 40years has lived with her family at the 16-bedroom Château Le Fresne close to Vendôme. As the young bride of the Marquis Paul de Brantes, she was appalled to discover that la vie de château lost something in translation when it came to paying for maintenance and upkeep. In 1988, she persuaded several neighboring owners to take part in an auction and convinced her friend the Vicomte de Sigalas to hold it at his Château de Cheverny.

The event was successful from the start. “What goes on sale may mostly be generations of wedding presents,” Sue de Brantes says, “but these things have come out of private collections, and most of them have never been seen before.” It’s this prospect of buying items that are fresh to the market that attracts dealers year after year. Dealers are themselves barred from entering items for sale, but they are happy to be there as potential buyers. “Maybe some of the objects are not in perfect shape,” says Stewart, “but you know they’ve either just come out of the storeroom, or the family can do without them because they have too
many similar pieces.”

If the professional dealers are there to bid, the local gentry, for the most part, are there to watch. It’s not considered seemly at Cheverny for château owners to bid on each other’s possessions.  The game is to see what the neighbor’s portrait of Great-Great-Aunt Amélie— unsigned, but which the family always insisted was by Le Brun—fetched after the Paris art buyers had scrutinized it. One day they may want to do the same with Uncle Georges.

Over the years, enough sellers have hit the jackpot to keep the items coming—and to remind buyers of the sale’s importance. Two years ago, “Sails in Chatou,” a  work by Fauve painter Maurice de Vlaminck, went for $1,628,000; at $600,000over the pre-sale estimate, it was the biggest sale in France in 2000. The picture had been given to the owner by the artist in the early 1900s. On the same day, an engraved 17th-century German amber-and-silver tankard sold for$177,240—a very strong price for amber, which was considered a precious metal in ancient times.

The action is brisk for the major items, with buyers bidding over the phone as well as in the big marquee set up for the purpose. An occasional irritant for professionals is that, because of the location, they often find themselves slugging it out with tourists. There was the recent case of a Manhattan plastic surgeon who happened to be touring the château and casually wandered over to take in the auction. A collector of antique sculptures, he happened to arrive when the marbre (marble) section was being sold. Impulsively, he began to bid on whatever caught his fancy. Within an hour he had purchased one outstanding and five good antique statues. He put them in the trunk of his rented Mercedes and drove away to Paris.

These days, Sue de Brantes still keeps an eye on things, but the auction is run by her daughter Flore, formerly of Sotheby’s London and Christie’s New York and owner of her own antique gallery in Paris. The commissaire-priseur,or auctioneer, is Philippe Rouillac.

Rouillac has a weakness for objects other gavel bangers might have doubts about. A couple of years ago he was asked to include in the sale a machine for cutting and shaping ivory. It was made 230years ago for the Duc de Choiseul, who wanted to have the same hobby as his king, Louis XV. It had been rusting away in the Choiseul family seat ever since. The machine had a lathe operated by a foot pedal and stood on an inlaid oak cabinet with sculpted sides. At Cheverny it drew puzzled stares, but Rouillac knew what he was doing. The Louvre won it, after spirited bidding, for $15,000.

The Choiseul ivory cutter became an instant Cheverny legend to be discussed over lunch between sales sessions. So did the sale of a collection of sketches of Rome by the Marquis de Sade. Made while the illustrious author was banished to Italy, they were put up for sale by his highly respectable direct descendant.

This year, however, Topic A was how the arrival of Sotheby’s and Christie’s would affect the French auction market. “I don’t think it will have much of an impact on Cheverny,” says Flore de Brantes. “There’s one thing we can offer at Cheverny that the big houses can’t, and that is very personalized service. Philippe Rouillac likes to say that he does haute couture rather than prêt-à-porter. Many sellers and buyers rather enjoy always talking to the same person and not having to deal with huge structures like Christie’s and Sotheby’s. You see, apart from being an auction, Cheverny has a very human dimension—a wonderful festive atmosphere that makes it unique.”

The other leading topic was the perennial one of security as burglaries in the area continue to increase. Sophisticated alarm systems cost money, and one château owner volunteered that she had an unusual sentinel—a baby wild boar. “A young boar can be very well behaved and affectionate, but it still looks ferocious,” she explained. “It will charge at anyone it does not know, and intruders run away terrified. When the boar gets too heavy to jump on your lap, you just get another one.”

“But what happens to the old one?” someone asked.
“Pâté,” she replied brightly.