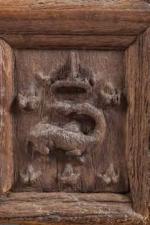 Details of the carving on the window showing the salamander symbol and the
initial of François I, King of France. 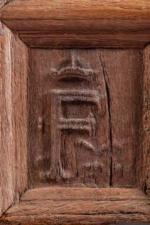 Details of the carving on the window showing the salamander symbol and the
initial of François I, King of France.
The French auction firm Rouillac has successfully made a private sale to the Château de Chambord for one of its original 16th century windows thought to have been removed during the revolution.
Chambord, in the Loire region, which has belonged to the French state since 1930, was built as a hunting lodge for François I of France (1494-1547), with construction beginning in 1519.
It was ransacked during the French Revolution and, although, it has 632 windows, only two others are reckoned to be original.

The auctioneer Aymeric Rouillac discovered the window, which had been in the Azay-le-Rideau region, during a valuation day in Tours.
The 4ft 3in high x 2ft 3½in wide (1.3m x 70cm) carved oak window bears the salamander emblem of François I and his initial. It opens via a shutter closed by a wrought iron bolt in the form of an F surmounted by a crown.
Rouillac negotiated the private sale with Chambord, which bought back the window in January for €45,000 (£38,135)
Subscribe to our newsletter:
Follow us:
©2023 Rouillac SAS