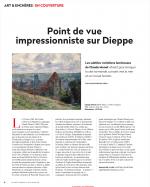 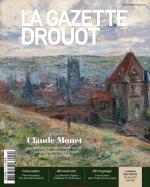 Monet uses subtle variations in light to depict this town in Normandy, opening towards the sea and a new horizon.

On February 5, 1882, at dawn, just as the countryside was beginning to lighten, Claude Monet (1840-1946) left Poissy for Dieppe, where he arrived late after missing his connection at Mantes. His journey to the seaside resort was clearly no coincidence; he grew up in Normandy, and during the time of the Impressionists, Dieppe hosted a colony of artists exploring an approach that combined both emulation and syncretism. Renoir, Pissarro, Degas, Eguène Boudin and Jacques-Émile Blanche all spent time there, drawn by the quality of the light along the Alabaster Coast. Monet stayed for two months at the Grand Hôtel du Nord et Victoria, a hotel with an ideal position facing the pier where ocean liners sailing to and from England would dock. This cost him 20 francs a day, and he often complained about it in letters to his companion, Alice Hoschedé. He then traveled a few miles further on to the rocky coast of Pourville, where he took frequent walks, admiring the silvery reflections in the sea and exploring the cliff paths constantly searching for new subjects.

During this stay, he completed only two works: Le Port de Dieppe, le soir (The Port of Dieppe at Night) (Dixon Gallery and Gardens, Memphis) and the one here, La Ville de Dieppe (The City of Dieppe). From the path behind the castle, he painted an impressionistic snapshot of the town. With fluid, vibrant brushstrokes, he marvelously rendered a high-angle view of the city and sea behind the proud silhouette of the medieval fortress, against a background of blues with touches of green, yellow and red. In the middle ground, the church of Saint-Jacques and the slate bell tower of the church of Saint-Rémy emerge from the roofs of the old city, while in the background, the port is engulfed in a misty halo. The painting encapsulates a sense of transience, a colorful impression and variations in the atmosphere. A small figure—perhaps the artist—invites us to contemplate the landscape in his company. What better tourist guide than Claude Monet to explore Dieppe?

This painting has already had several lives. Firstly, the artist's son Michel inherited it. He sold it in 1940 after revealing the painting to the public for the first time. It was bought by the gallery owner André Weil, who took it to New York when he fled the advancing Nazis. In January 1945, the American gallery Knoedler & Co. bought it for $2,000 and sold it to Isabel, wife of the financier Charles V. Campbell. It was finally bought at her post-mortem sale at Christie's by the Japanese collector now selling it in turn. With its Wildenstein Institute certificate dated October 23, 2014, it is poised to set off for a new horizon.
33rd GARDEN PARTY AUCTION - Day 1
Sunday, June 6th 2021, 14:00
Lot 70
Subscribe to our newsletter:
Follow us:
©2022 Rouillac SAS