the sketch for the portrait kept at the United States Embassy in Paris, circa 1876. 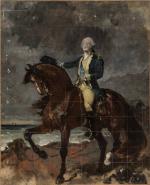 Preparatory sketch and laying down a grid of the painting presented at the Universal Exhibition in Philadelphia in 1876 and kept in the residence of the United States Ambassador in France.


References for the completed painting:

As solemn as it is dynamic, this sketch represents a general holding a bay dress horse with his left hand. Powerful, but controlled by its rider, the group poses under a stormy sky. The two-time President of the United States is dressed in a yellow and dark blue suit, with epaulets, a sword and gold spurs. Washington's hieraticism, discovering his bicorne with his right hand as if to salute the spectator, is opposed to the movement of the horse's mane caught in the wind from a sea sprays. On the left, four sailboats detach from the spray, overlooking an undefinable land mass. Probably Admiral De Grasse's ships. To the right, a high dark mass would represent the Yorktown fort; it overlooks a smoking object that could be a cannon. In the lower left corner, two cannonballs complete the composition. 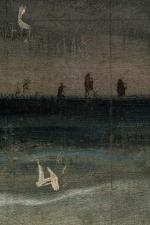 While the painting exhibited at the U.S. Embassy is distinguished by some of the details of our sketch, the restoration it underwent does not allow us to appreciate it as it was presented at the 1876 Universal Exhibition. However, an old postcard (16.3 x 11.2 cm, part. coll. General Amade) provides a version of this painting closer to the one in our sketch. The mass in the lower left corner has turned into a cannon that disappears to the right. The fort on the right was topped with a starred banner. The other elements, the intensity of the colours and the naturalism of the portrait, are part of the completion of the painting and not a transformation of the composition, transposed onto a canvas sixteen times larger (Height: 369, Width: 296 cm). 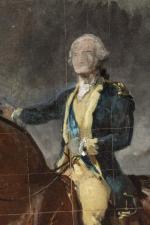 Celebrating the centenary of American independence at the Universal Exhibition in Philadelphia, the completed painting was displayed in prestigious settings before being exhibited in a place that would bear witness to Franco-American friendship: the United States Embassy in Paris. René Princeteau, animal painter specialized in equestrian representation, presents his masterpiece here. France, the oldest ally of the United States, sends Philadelphia an equestrian portrait "à la Van Dick" of the American founding father. 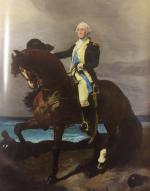 In 1871, the construction of the Statue of Liberty, a token of friendship across the Atlantic, began... The colossal work could not be delivered in time for the Philadelphia Exhibition, so Bartholdi had the most symbolic element displayed: the torch-bearing arm. Our sketch, the missing link in the development of the famous portrait of Washington, presented the same year, is a major witness to Americanophilia in the late 19th century.

This painting is reminiscent of the portrait of Washington by Charles Willson Peale offered to Rochambeau that we sold in Cheverny in 2002. The ancestral Franco-American friendship continues a hundred years after Lafayette's engagement with the "Insurgents" in 1776. Under Princeteau's brush, George Washington is represented as the father of the American nation, leaving the image of an empire founder, a great soldier and a citizen.